From the Farm to the Fridge

From the farm to the fridge is a poster that has been developed in support of the school curriculum for grade 1- 3, to teach learners about the food path to produce milk and other dairy products.

Milk is a popular food item worldwide and contains a variety of important nutrients. Through the centuries humans have learnt to use milk to make many different food products, for example maas, yoghurt and cheese.

Milk comes from cows. Cows, like all mammals, produce milk to feed their young. A dairy cow gives birth to one calf a year and produces milk for about ten months afterwards, provided she is milked regularly.

Commercial dairy farms in South Africa are found in areas with a high rainfall, plenty of water and green grass. Milk is transported in tankers from the farms to dairies where it is pasteurised, packaged and then transported to shops. Commercial dairy farmers sell their milk to milk processors or other factories, who, in turn, sell the processed dairy products to shops where consumers can buy it.

P.S. Get your teacher, mom or dad to download the cool educational stuff on how everyone can eat healthy and balanced, everyday! 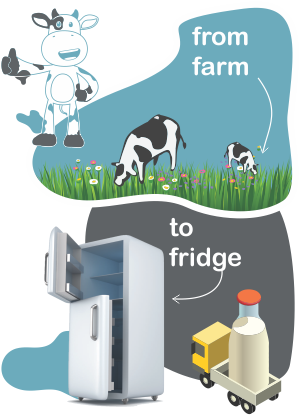 The first step in the production of all foods is the process of photosynthesis. Green plants produce carbohydrates (sugar) in the presence of sunlight, water and air.

The cow’s diet is very important as it determines the quality and quantity of milk she will produce. A cow produces milk in the udder, where it is stored until she is milked.

A cow needs 15–20 kg of feed and 45–90 l of fresh water a day. Cows eat grass (pasture), hay or silage. Licks containing salt and other minerals may also be provided to supplement the diet. On average a cow produces 20L of milk per day.

Cows are important farming animals. Their milk can be used for drinking and also to make products such as maas (amasi), yoghurt, cheese, butter and cream. 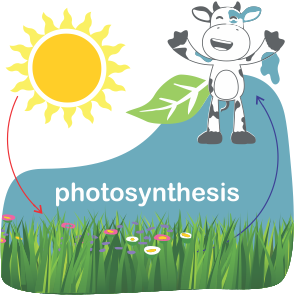 Cows eat grass and absorb the nutrients during digestion.  These nutrients are used in the cow’s body to make milk.

Cows have a special stomach system, which consists of four stomach compartments, to help them digest grass properly. 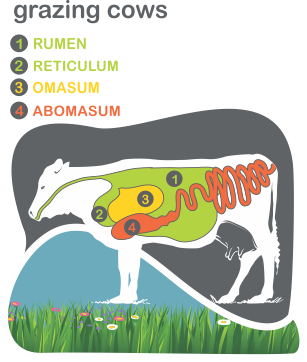 Cows can be milked by hand or by machine. However, machine milking is common practice on commercial dairy farms because it is faster than milking by hand. It takes about 5-8 minutes to milk a cow by machine.

Cows are milked in rooms called milking parlours, which should be well ventilated. The milking equipment includes four teat cups and a vacuum pump. The cow’s udder is washed and sanitised before milking and all the equipment has to be sanitised too. The farmer can then gently connect the milking machine to the teats.

The milk is pumped to a bulk storage tank where it is refrigerated before being transferred to a tanker truck. Because the tanker truck is also refrigerated, the milk is kept cool while being transported to the dairy. Once the cow has been milked, she returns to the barn to eat and walk around. 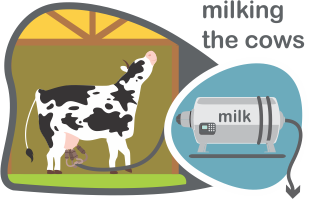 From the farm the milk is transported by the farmer in refrigerated trucks to the dairy or milk processors.

The farmer makes sure that the trucks are cleaned and sanitized between each batch of milk that is transported. Hygienic practices in the milking parlours and during transport of milk are a priority at all times.

The Dairy Standard Agency is a body within the milk industry that control the safety of milk at all times. 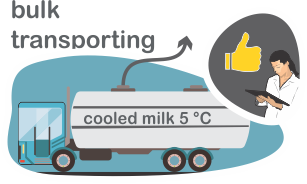 At the dairy processing plant, the milk is pumped to refrigerated storage tanks. It is pumped to the pasteuriser, where it is heated to 72°C for 15 seconds and then cooled to 4°C very rapidly.

This process, called pasteurisation, kills any harmful bacteria that may be present in the milk and is required by law in South Africa. The process of pasteurisation was discovered in 1868 by the French scientist, Louis Pasteur (1822–1894).

Another form of making milk safe for consumption is to provide extended shelf life milk (ESL). ESL milk is milk that has been treated in a manner to reduce the microbial count beyond pasteurisation. ESL milk is packaged under extremely hygienic conditions and has a longer shelf life than fresh pasteurised milk when kept at a temperature of 0–5°C.

Ultra-high temperature (UHT) treatment allows milk to stay fresh and safe for a long time. The milk is heated to above 125°C and then packaged aseptically. The end product is free from any micro-organisms or spores that could cause spoilage. The UHT process is quick, so very few vitamins are destroyed. UHT-treated milk, also referred to as long-life milk, can be kept at room temperature in the sealed packaging for many months without going sour. Once the package has been opened, the milk must be kept cold and used in the same way as fresh milk.

Milk may also be homogenised to improve the fat distribution. Homogenisation forces the milk fat through a very small nozzle. at high speed and breaks the fat drops into smaller droplets. This keeps the fat droplets evenly distributed in the milk.

The pasteurised milk is then pumped into tanks, from which smaller containers such as bottles and cartons are filled for use by consumers. After filling, the containers are stored in bulk in large fridges to keep it cool till the time of dispatching.

All the equipment used during this process is made from materials that are easy to clean, so that it can be cleaned thoroughly each day. The Dairy Standard Agency does regular hygiene evaluation on processing plants to ensure that milk is stored and packed hygienically.

Milk can also be used to manufacture yoghurt, maas or cheese. 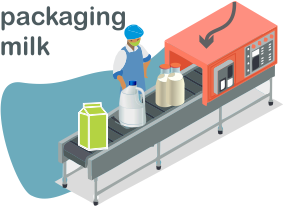 The packaged milk or other dairy products are transported in refrigerated trucks to all the different shops and retailers.

Refrigerated trucks ensure that the dairy products arrive at the retailer in good condition, as most products are perishable and will go off if not kept cool (at the correct temperature of <5°C) during transportation. 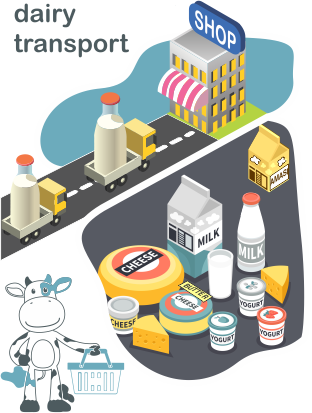 Other dairy products available in the shops are:

Fruit yoghurt and drinking yoghurt are fermented products. Adding beneficial bacterial cultures to milk allows it to go sour, which gives yoghurt its typical taste and texture. Fruit flavouring, fruit pieces and chocolate chips may be added, making yoghurt tasty and a perfect snack to enjoy with or between meals.

Maas, also known as amasi, is made from milk that has been fermented using beneficial bacterial cultures. This slightly sour and thickened dairy drink is enjoyed by many South Africans, just as it is or traditionally adding it to pap.

Buttermilk is made in the same way as maas, but by using a slightly different culture. Commercially available buttermilk is also called ‘cultured’ buttermilk.

Humans have been eating cheese for thousands of years already. Long ago the discovery of cheese was probably quite by accident, when people realised that milk goes sour and curdles if it is kept in a bag made from an animal’s stomach. This is caused by the enzymes found in rennet, which lines a calf’s stomach. Rennet makes milk separate into solid curds and liquid whey. The curds can be pressed to form a firm cheese. Some cheeses can be left for several months to produce a strong flavour and are called mature cheeses. Today the cheese making process is modernised.

Cream is the fat from milk. Because fat is less dense than water, the cream will float to the top. The creamy layer can be separated from the milk before further processing. The milk available in stores has been homogenised so that the cream does not separate from the milk.

Butter is cream that has been shaken or churned until the fat separates from a watery liquid called buttermilk. To make 1 kg of butter you need 22 l of milk. Years ago, butter used to be made in a churn and was shaped with wooden tools, called pats, into rectangular blocks. If butter is not kept in a cool place, it will turn bad (rancid) quite quickly. Salt can be added to butter as a preservative.

Italians invented ice cream about 500 years ago. Traditional ice-cream is frozen cream, flavoured with fruit and vanilla and sweetened. Real ice-cream is made from full-cream milk, cream and other ingredients. The label on the container will indicate if it is made only from dairy fat or if plant fats have been added to reduce the production costs.

Ghee is Indian cooking butter. It is butter that has been heated and strained to remove almost all the water.

Dairy products are versatile and can be part of any meal or snack during the day. It is recommended that three servings of dairy are consumed every day. It is also important to remember that milk and other dairy products are kept in a refrigerator and cooled to below 5°C.

Some examples of a single serving are:

You can include dairy in your daily diet by:

Try and make the following smoothie at home for fun.

Tip: Freeze banana and berries the night before for a different textured smoothie.